Calibration of the BATmode-System is essential to make recorded bat activity data comparable. As we are continually asked calibration related questions, we would like to briefly explain and demonstrate in this article how you can ensure correct calibration of your system. To open this document as pdf, please click here.

At the bottom of the page you will find a tool to calculate the Trigger Level Threshold in dBFS and in percent from the Calibration Values of your microphone and the Trigger Threshold used. This is necessary, for example, when using analysis programs from other manufacturers.

As the essential factor in the determination of bat activity is not the loudness of calls per se but their number, it is especially important to define exactly for which real sound pressure level Lp a bat call can trigger a recording. This so-called "Trigger Level Threshold" AdBSPL thus represents a parameter for the sensitivity of the detection system and make results comparable. In general, it can be said that the quality of a bat activity monitoring can be increased by selecting lower trigger thresholds AdBSPL. This makes it possible to detect quieter calls and therefore calls of distant animals. In turn, this of course also increases the chance to obtain recordings of noise, which have to be laboriously removed from the resulting data set.

How does a calibration work in general?

Calibration of the BATmode-System with microphone discs of bat bioacoustictechnology

The microphones of bat bioacoustictechnology are delivered with a calibration certificate, as exemplified in Figure 1. 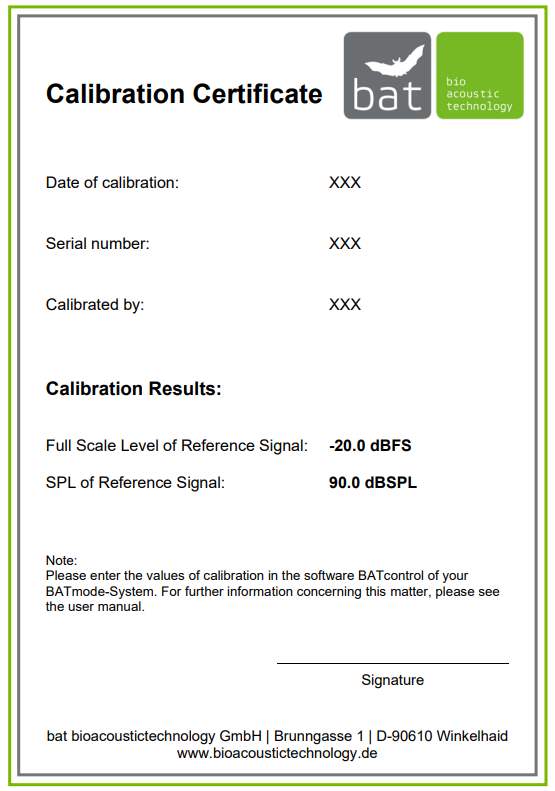 For calibration enter the two values, which are also noted on the microphone, for the respective microphone channel in the calibration dialog of BATcontrol (available on the page "Monitoring" by clicking on the button "Calibration", see Figure 2). Furthermore, insert the desired trigger threshold AdBSPL in the field "Level of Trigger Threshold” and select whether your microphone has an integrated test signal generator or not. Then click the button "Calibrate now!". By confirming the opening warning your system is calibrated. The calibration is also visually confirmed and the resulting trigger level threshold is displayed in % (A%). This value can be checked in the Configuration dialog of the RECORDER software (see Figure 3). 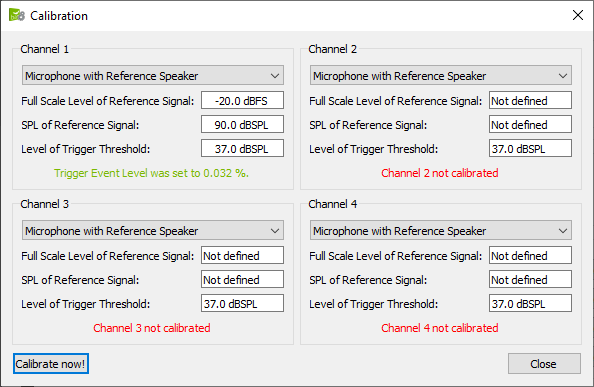 How were the calibration values on the certificate determined? 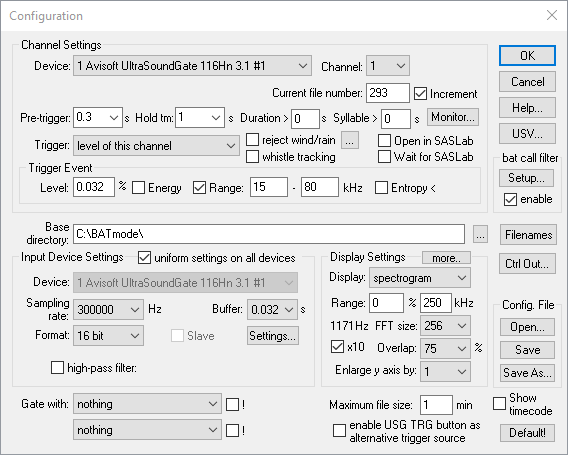 In the following, the calibration of the RECORDER software is explained in detail for the case that you are using a microphone or a microphone disc, which is not original from bat bioacoustictechnology. Since Avisoft Bioacoustics only indicates the sound pressure level of the test signal generator on its microphone disc, but not the resulting microphone output UT in dBFS, the output must be measured by utilizing the software RECORDER. (Please perform this measurement at room temperature and, if possible, in an anechoic chamber or hold the disc during the measurement away from walls, so that no possible sound reflective object is in close proximity in front of the microphone disc!):

At this point, we want to refer to the official user manual of the software RECORDER of Avisoft Bioacoustics, in which the calibration of the software is described for a general case. You can download the manual from www.avisoft.com.

Below, the Trigger Level Calibration dialog of the software RECORDER is explained in detail to give you a broad background knowledge of the calibration functionality of RECORDER software.

Information which have to be provided by the user:

Here, 3 dB must be subtracted to account for the reference signal level given as RMS (root mean square) value*. After calibration, the trigger level (threshold) A% [%] corresponds with the value of the Trigger Event Level in the Configuration dialog the software RECORDER (see figure 3).

Calculation of the Trigger Level Threshold

Using the calculator tool below, you can calculate the Trigger Level Threshold in dBFS and in percent from the calibration values of your microphone and the Trigger Threshold used.